A simple suggestion. We not know nothing about the Beowulf suggestion, but I want suggestion a NPC for them. A Wrestler Referee.

In a past, the great game Samurai Shodown, all battles have the presence of a mysterious judge who move and interact with the flow of the battle. In the Samurai Shodown II, one of this Judge, Kuroko, are a secret boss. 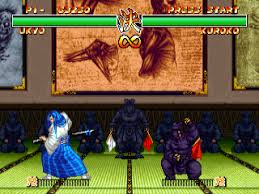 Kuroko battle, with another judge "judging" and others.

The judge aways present, even in the final boss battle, and in any stage.

So, my suggestion is a referee to the Beowulf stage, whatever the localization, judging the battle like Kuroko. A great NPC and a great tribute to a great game!
Last edited: May 27, 2014

In Wrestling they're called Referees.

That's all I had to say, later.
Reactions: scottvincent and Fumako

we need SG versions of WWE wrestlers as the NPCs.
Reactions: Broseidon Rex

That's all I had to say, later.

Thanks! My english vocabulary still have holes

in my opinion one of the old school wrestlers include:

Perhaps the rudest wrestler lucha libre was met Rodolfo "Cavernario" Galindo; one occasion in which a fan threw the center of the ring is remembered a snake, grabbed the cave and took a tremendous bite, winnowing minutes more afternoons ringside fans. The cave was able to cause admiration and hatred simultaneously. The Lord of the swamps Xochimilco, his little jungle, his alter ego in the city, and was before his death a myth in the collective imagination: Some ask me: how long has your dad dead? Rodolfo Galindo son talked, just on May 27 this year, when the Carlos Pellicer de Xochimilco, Cultural Center performed a tribute and an iconographic exhibition opened in the presence of Cavernario.

He was so rude and caused such abersion people that on one occasion, the public set fire to the ring ... the funny thing is that was still provoking them and laughing


and El murcielago velazquez in the school setting

Wrestling, as the more rustic or refined theater requires that people become characters. About daily life, other than in the ring, the fighters are multifaceted taste and need. In the annals of Mexican wrestling, there may be no one who can compete with José Jesús Quintero Velázquez, civil name who fought in arenas as El Murciélago about the versatility of the trades performed. The ever enigmatic Murciélago Velázquez can say it was adventurous, police, poet, storyteller, friend, guitar student of herbalism, film scriptwriter and cannibal. 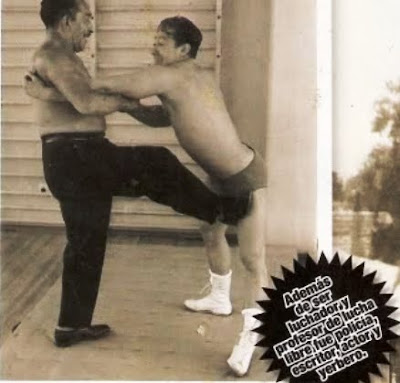