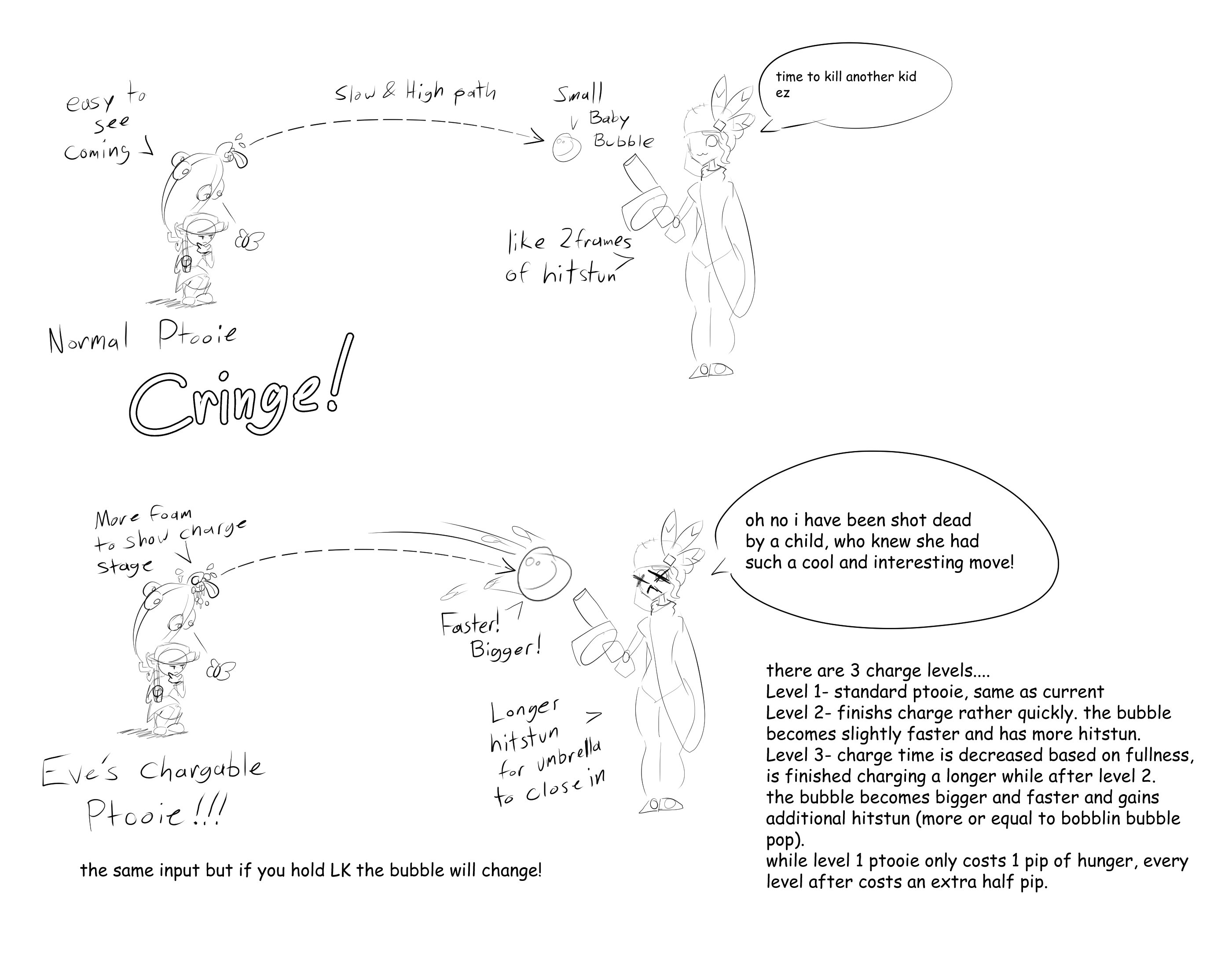 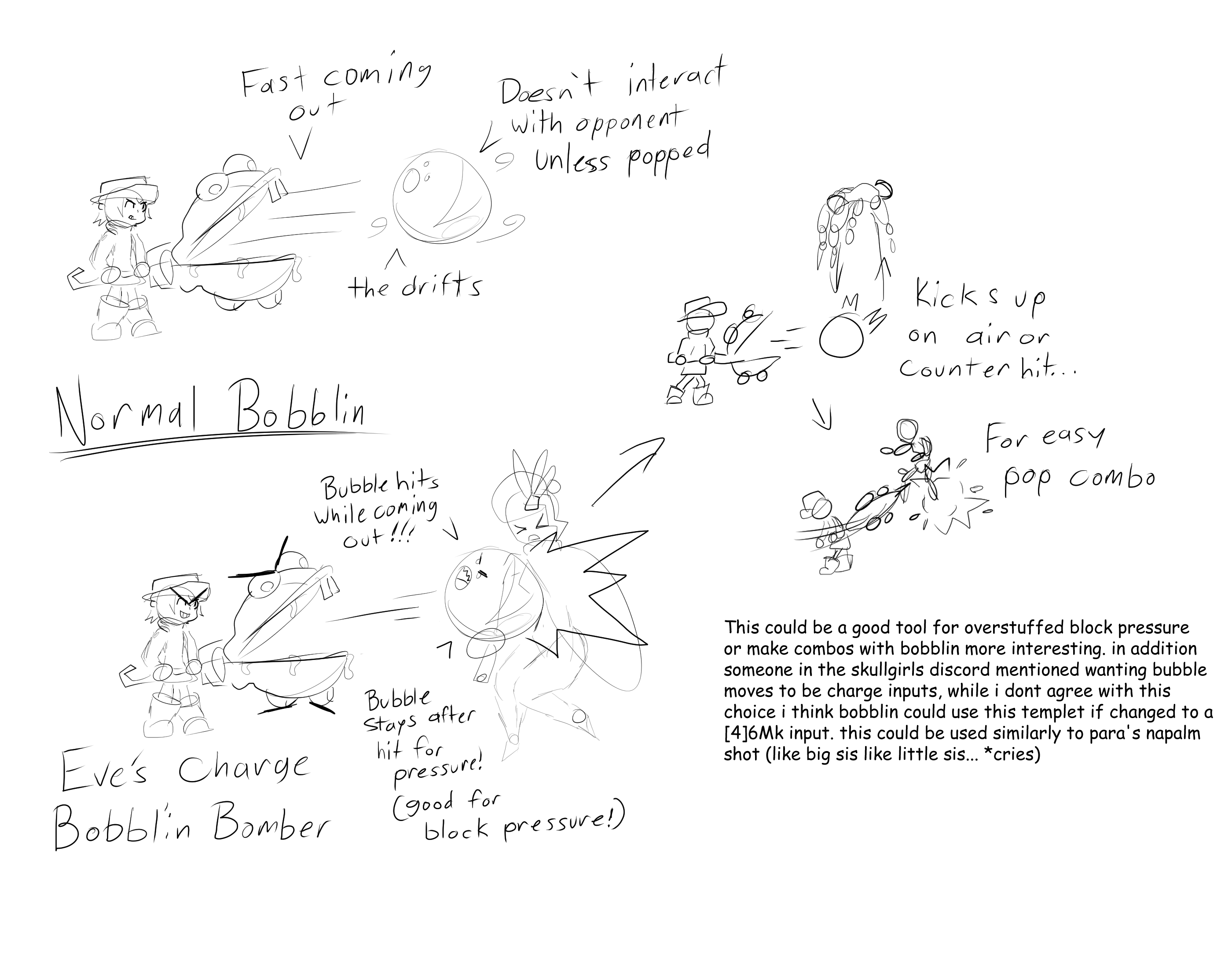 Me and a bunch of other people in the Skullgirls discord Umbrella channel were talking about the recent input changes for Umbrella and talking about if there were more changes that could be made. I misunderstood what someone meant by "charge bubbles" and thought of 2 different ways bubbles could be chargeable! I would like to thank the Skullgirls Umbrella discord channel for helping flesh out these ideas I spit balled.

Charge Cutie Ptooie:
Right now ptooie is a low moving projectile that can be easily dodged and gains little reward for hitting opponents. There is little worth in using ptooie in a regular match and this will hopefully improve the moves use in matches. With the chargeable version of Cutie Ptooie approaching your opponent will become easier, allowing you to lay on the pressure sooner and harder! With each successive charge level for ptooie the bubble becomes more threatening to the opponent.
-Level 1 charge: no difference from normal ptooie, it's classic ptooie!
-Level 2 charge: after a short charge the ptooie bubble becomes more aggressive! The bubble becomes faster and deals more hitstun if it hits the opponent.
-Level 3 charge: after a longer charge from level 2 then level 3 is reached! (The state of umbrella's hunger could influence the speed of level 3's charge time. Ravenous charges slowly and overstuffed charges fast!) The ptooie bubble grows larger and becomes faster, the bubble also has more hitstun when hitting the opponent leaving them stunned for a lengthy amount of time!
In addition, when ptooie is used now it uses only 1 pip of hunger. When ptooie is charged it will cost an additional half pip more with each successive level reached to a max of spending 2 hunger pips!

Charge Bobblin' Bubble:
Right now bobblin is used to just summon umbrella's larger bubble which can be used as a jump boost or setplay tool with its pop being a surprise attack and the puddle it leave behind another strong tool. However currently bobblin is just used for the big bubble that summons puddles, combos are made for confirming into the pop however they are often basic and similar in execution. With the new chargeable version of Bobblin' Bubble not only will combo's be more interesting but so will block pressure and hunger management!
-Normal bobblin's bubble comes out quickly then starts to drift forward. Charge bobblin's bubble will use that initial dash the bubble has as an attack that rams into the opponent! This turns the setplay tool into a interesting pressure tool.
-On air hit or counter hit the bobblin tackle should knock the opponent upward similar to 2mk puddle. This way confirming into the bubble pop and perhaps even the puddles are easier.
-On hit or block the bubble stays after the tackle. With the bubble still active the setplay becomes more interesting as the bubble can be used immediately with plenty of reward or be used with block pressure to put the opponent in a trap they will have trouble getting out of! There are several uses for the bubble tackle and they only increase the amount of interesting and fun tec that unbrella has!
-All of these uses for charge bobblin make it a fantastic pressure tool that if used carelessly could drain your hunger! Because bobblin bubble costs hunger pips to throw out, using the bubble to much in pressure without feeding hungern could be very bad news for umbrella.
I think that Bobblin' Bubble and umbrella could really use a change like this to help improve their gameplay. In addition this is one where I think changing bobblin to a [4]6MK input would help balance it.

Charge Wish Maker:
I have no idea how a Chargeable Wish Maker should work! It's already a really crazy move and the best idea I can think of it "Hold the button for a bigger wish maker bubble." In my eye's wish maker is fine as is but maybe someone can think of a way for it to work.

This is all the info I have on what my idea's were for chargeable bubbles. In the end I feel like umbrella is missing something from her moveset but I never know what, but it hits me then that compared to other characters in the cast umbrella doesn't feel "crazy." I want umbrella to feel "crazy" and I love umbrella already, no matter what I love her enough to commit to playing her as a main pick after beta. However I want to throw my ideas into the forums as I'm told a lot by the discord that the devs look in here more. Hi future club! Hi hidden variable! I hope you think my idea's over.
Reactions: MachiTheFool
You must log in or register to reply here.
Share:
Facebook Twitter Reddit Pinterest Tumblr WhatsApp Email Share Link
Top Bottom