I am making this thread to promote events in the Brazilian scene of Skullgirls, SGBR.

Discord - A New Way to Chat with Friends & Communities

Discord is the easiest way to communicate over voice, video, and text. Chat, hang out, and stay close with your friends and communities.

We welcome everyone with open arms.
Last edited: Jul 31, 2022
Reactions: Moris, Hyggend, Receita Federal and 11 others

Today (07/31/22) at 9 PM (8 PM-EST) we have an exhibition match with UA Receita Federal, our 2nd best player on the scene, and Vineko, our best Umbrella Player and an extremely creative player. 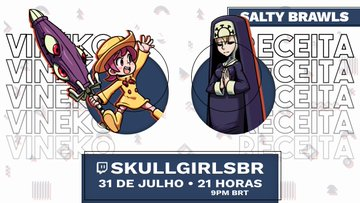 Recently our calendar for the month of August was released, here is our planned activity for this month. 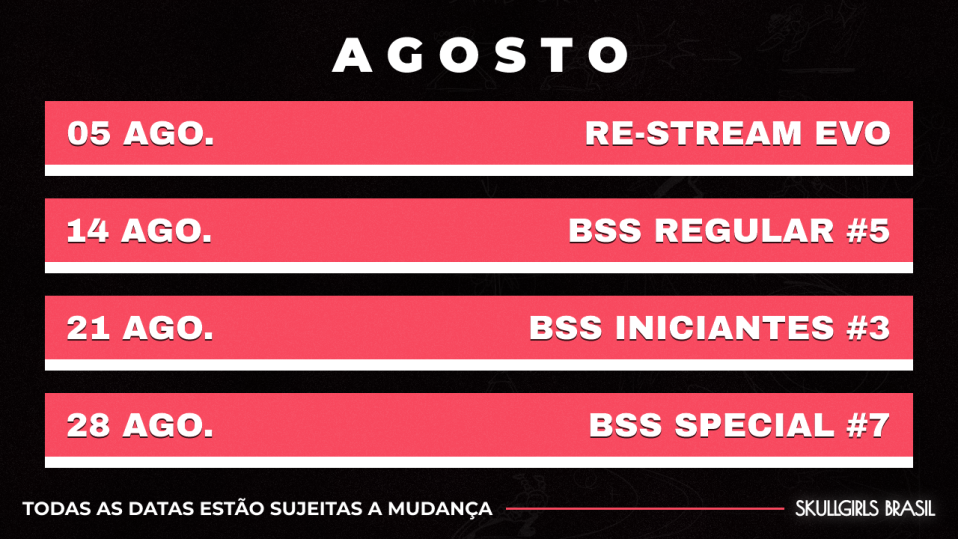 Given the upload of our calendar of activities, I want to explain some of the events to those who are not familiar with or don't understand Portuguese.

BSS
Our main event for the scene is Brasil Special Showdown (BSS), a Double Elimination, First to 3 tournament that always occurs on the last Sunday of the month, at 7 PM (6 PM-EST) with a pot prize raised by the community with help from Matcherino. 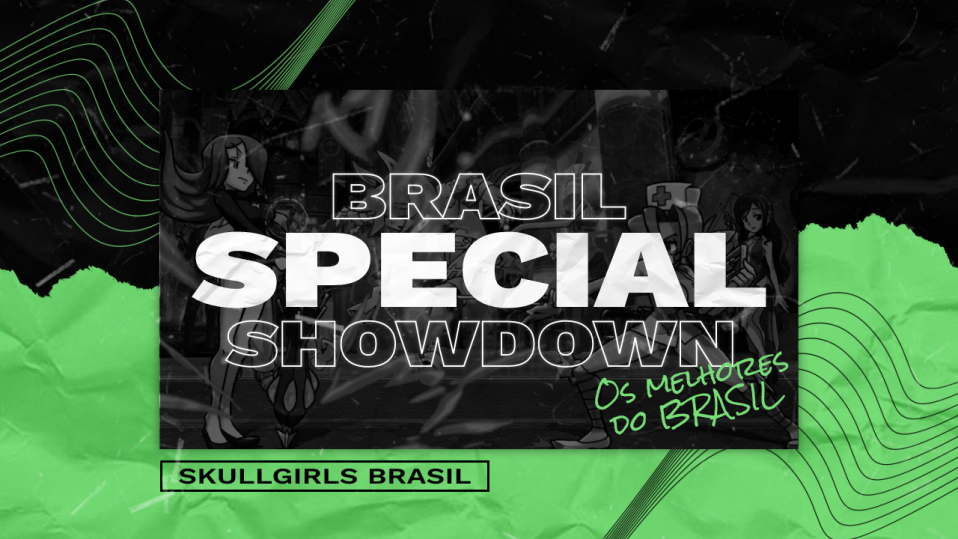 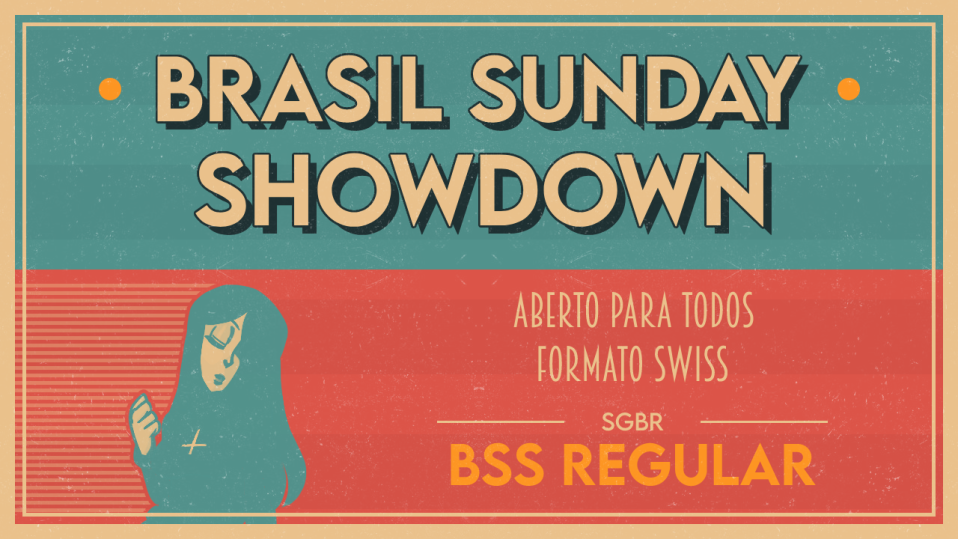 BSS BEGINNERS/BIS
We also have dedicated events for players who are just starting Skullgirls with dedicated feedback from our casters, BSS Beginners, an event that happens when there is a massive influx of new players entering the server, so it does not have a fixed date for when it will happen. This event follows similar rules to BSS, meaning that is a Double Elimination tournament, however, it does not have a prized pot. 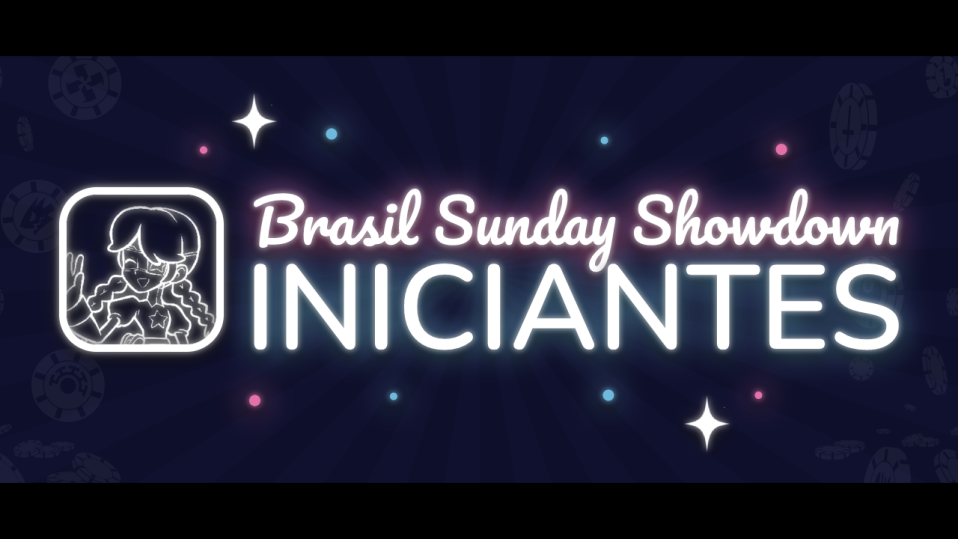 BIS
Similar to BSS Beginners, we have BIS, a nonofficial Swiss-styled tournament that happens every two weeks on Saturdays, this event is organized not by the official staff from SGBR but by four players of the scene, these being MI|Tiago, MagicJLS, ShinyPine, and CaioNog. This event has the objective to help all the players with feedback and instructions from the casters. It does not have a prized pot. 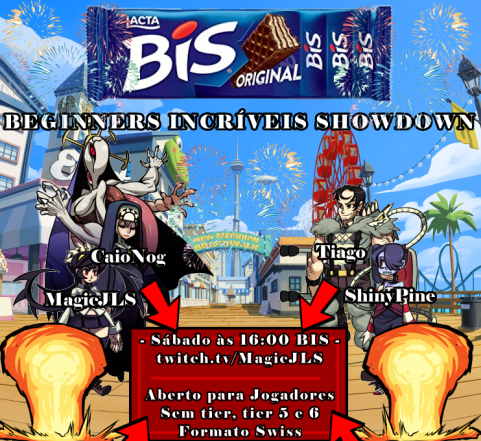 Salty Brawls
Salty Brawls are exhibition matches between two players, these matches are First to 10, with no specific date to happen, as it is up to the players to decide on a day and hour. This event is restricted to players from Tier 4 and above (the Tier System will be explained in another post). 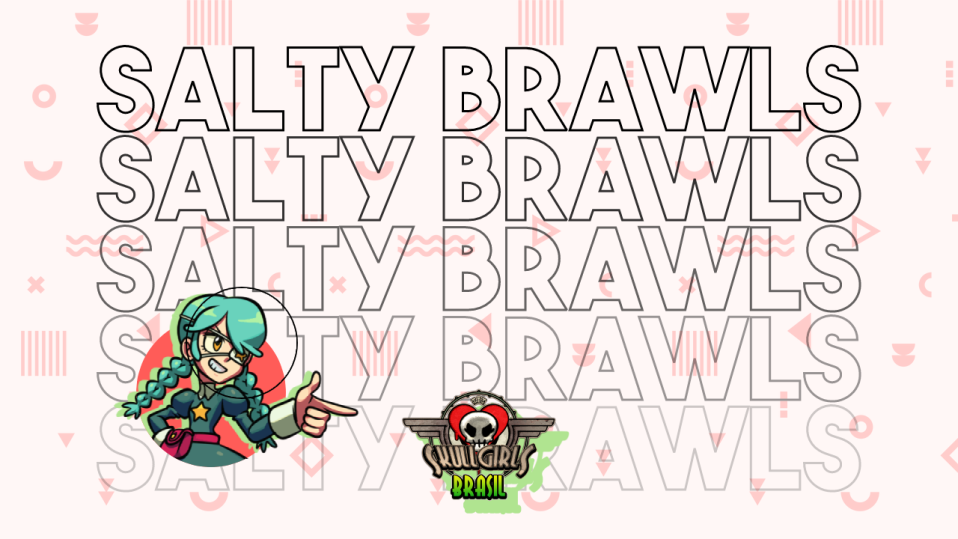 The Trinity's Trial
The Trinity's Trial is a Kumite for players who have been promoted to at least Tier 2, in which a player will face 10 different opponents, from all skill levels, in a First to 5. It does not have a specific date as to when it will happen. 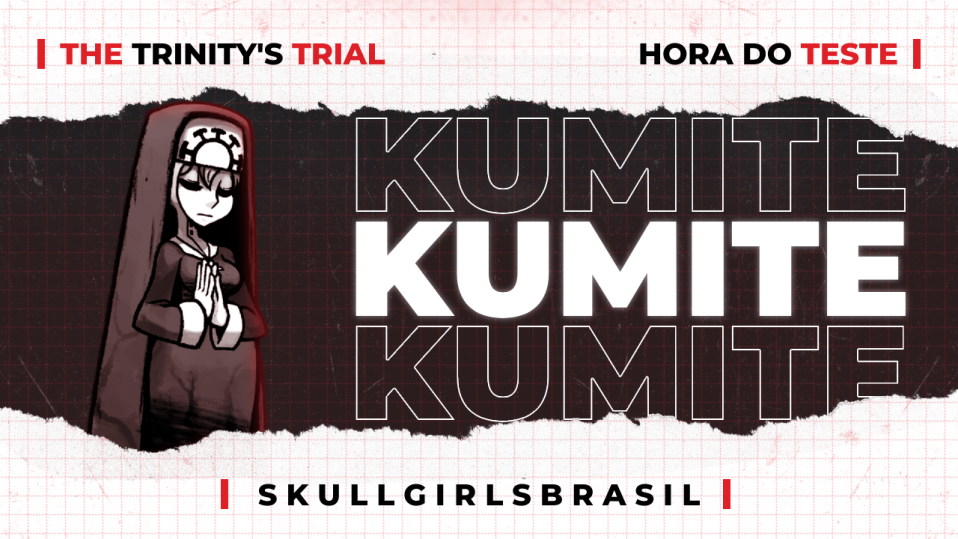 Tomorrow is the day of EVO and we of the SGBR Team will be doing a Restream of the event! 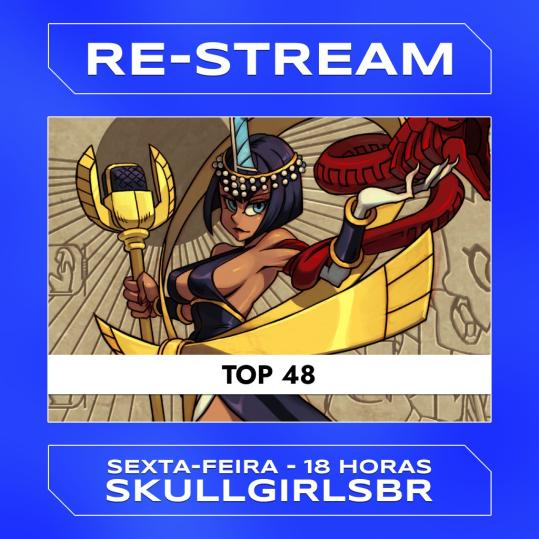 The top 8 will be streamed at 11 PM (10 PM-EST) with casting by Mwisk, an old-school SG player from Brazil that traveled to many Skullgirls events, and Acido, the best player from the entire scene and an ex-UMVC3 professional player. 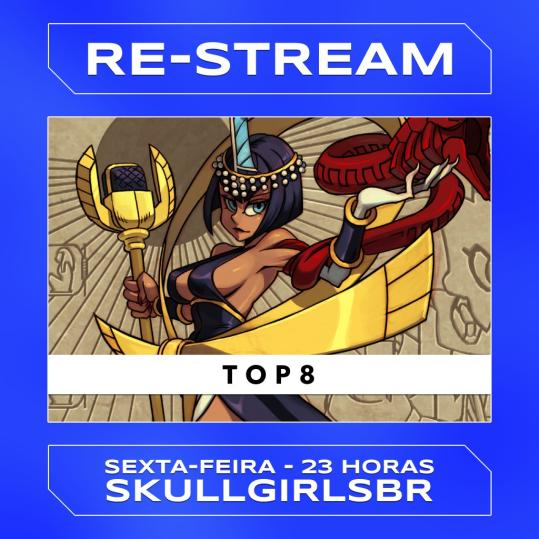 If you are interested in our opinions and reactions during the match, visit the Skullgirls Brazil Twich channel tomorrow for an epic event!
Reactions: Receita Federal, Kittens, Calexe and 4 others

Here we are with the restream of the top 48, join us for some deep and fun watch of the biggest Skullgirls event to date

Now for the main Attraction!

The restream for the Top 8, Grand Finals, and Final Character Reveal are now live

Due to certain situations, instead of having a BSS Regular today, we are having a Beginners, starring the new wave of beginners and aspiring players from Brazil, tonight at 7 PM (6 PM-EST) at the Skullgirls Brazil Twitch Channel.

Today we are having the fifth edition of BSS Regular, at 7 PM (6 PM-EST), and this is our first official tournament to allow Black Dahlia in tournament play. Come and Enjoy yourself with Us. 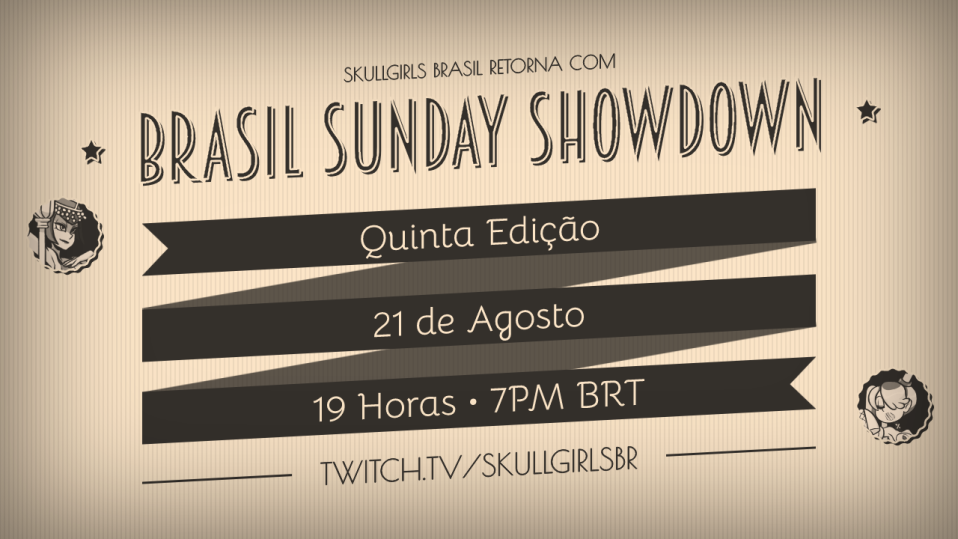 This Sunday (08/28), at 7 PM (6 PM EST), we have our 7th edition Brasil Special Showdown, also known as BSS, a double-elimination tournament and the main event of the community. 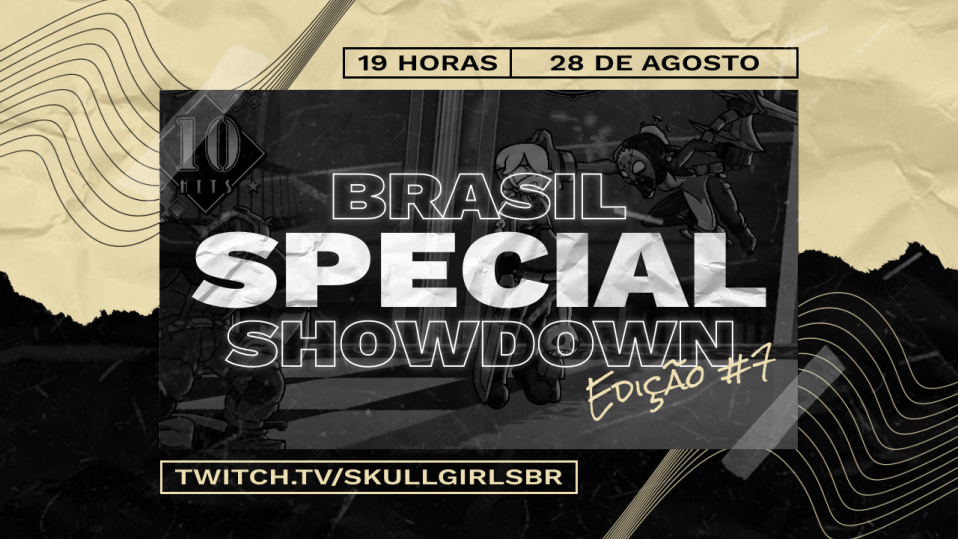 You can contribute to the matcherino of our tournament by clicking on this link: https://matcherino.com/tournaments/78691

This Thursday, Friday, and Sunday, at 6 PM (5 PM EST), we are having a very special edition of Salty Brawls, a hybrid of an Exhibition Match and a Double Elimination Bracket. 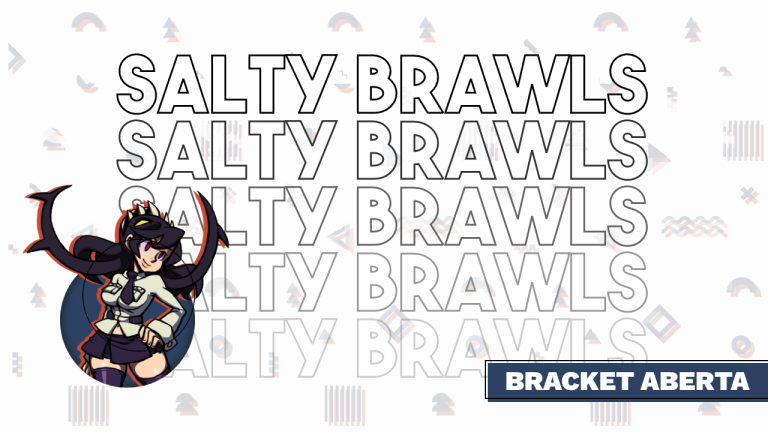 We are going to stream a set of FT10s in which the winner will progress through the bracket up until the Grand Finals, similar to a standard tournament run. Some of the competitors include Caio Lugon, the OG Ms. Fortune Player, and UA|Receita Federal, the winner of the Skullgirls Latam EVO of 2021, and besides them, we are proud to include members of the SUD Region with Merah, Hyggend, and Bandana.

We are expecting your presence at this awesome event that the scene has to offer.

Continuing our Special Edition of Salty Brawls, this Tuesday and Thursday we will be witnessing 6 FTs 10 between these players

Today we are having our special monthly event, Brasil Special Showdown, a traditional double-elimination bracket with prized pot contributed by the community with the help of Matcherino 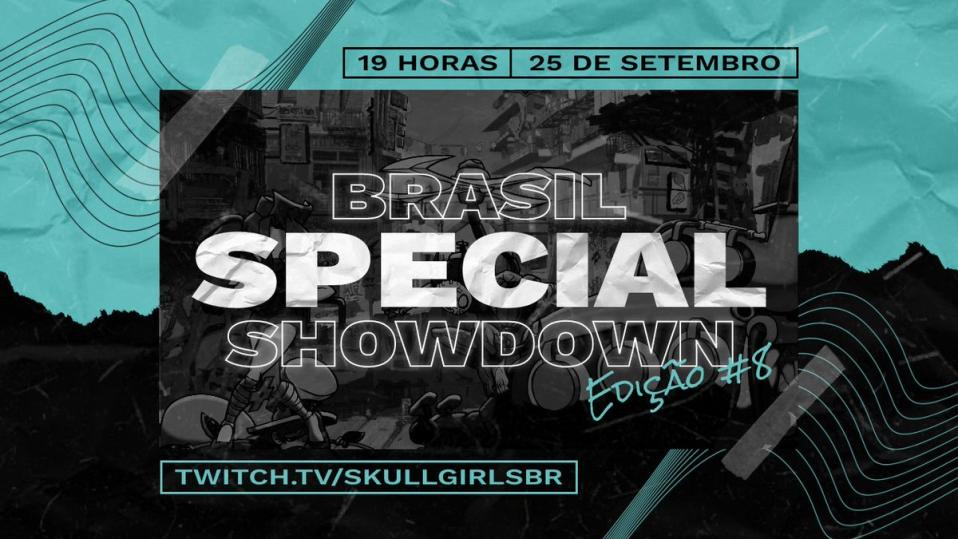 If you want to contribute to the matcherino, here is the link: https://t.co/l6rP1paDvd
Our Twitch channel: https://t.co/E1iTk3wF8P
For those who wish to see the bracket, here it is: https://t.co/4miHospJDr

Continuing our special edition of Salty Brawls, we are having another stream of FT10s, at 7 PM (6 PM EST), we are having the last stream before the Grand Finals of this special event.

Today we are streaming the following matches

And after these matches, we are going to stream the loser of Receita and Caio against the winner of Hime and Aristal. 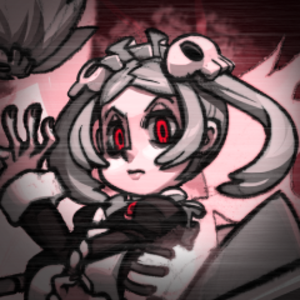 After all these fantastic matches, tomorrow we will be streaming our final battle of the bracket of Salty Brawls between Caio Lugon from the Winner's side and UA|Receita Federal from the Loser's side.

We are back to posting on Skullheart, and today we are announcing the return of BSS Beginners.

The event will be streamed on November 13th, this Sunday, at 6PM-BRT (5PM-EST)
Come check out these fantastic beginners fighting to the death! 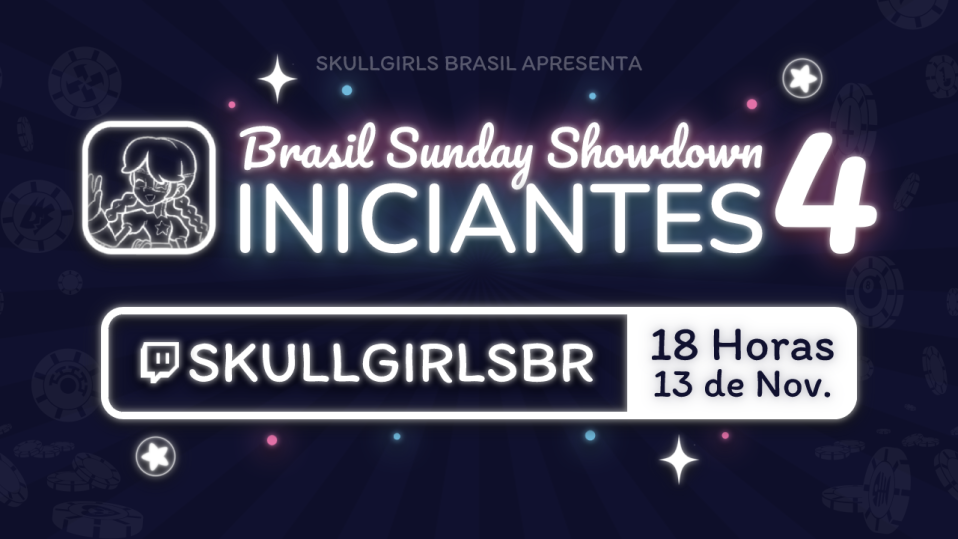